Disclosure: This post may contain affiliate links. I receive a small commission at no cost to you when you make a purchase using my link. Learn more
Home » Is Florida Tap Water Safe to Drink?

Florida has an enviable reputation for its sunshine and theme parks. But it’s also notorious for terrible tap water. Described as swampy with a side of rotten eggs, it’s nothing they brag about in travel brochures.

Ranked among the worst nationwide, Florida’s drinking water quality needs improvement. But why does it taste so bad, what’s being done to fix it, and is is safe to drink?

Before you pack your bags for the Sunshine State, here’s what you need to know about Florida’s tap water.

TL;DR Yes, the water is safe to drink and the State of Florida is mandated by Federal laws and regulations to provide safe and clean drinking water.

Why Does Florida Tap Water Taste and Smell So Bad?

No tap water is pristine. Like most major cities, public water supplies in metropolitan areas of Florida contain their share of potentially hazardous contaminants.

But remarkably, it’s not dangerous toxins that are to blame for common taste complaints — it’s hot weather, a skyrocketing population and unfavorable geology.

In 2017, central Florida residents flooded treatment officials with calls about their tap water. A swampy, fertilizer-like smell was erupting from taps. The cause of the problem? Compounds released by a non-toxic algae bloom brought on by unusually warm spring weather.

Unfortunately, the Sunshine State lives up to its name with an average daytime temperature of 90 °F in June, so these incidences aren’t rare.

These residents, however, were lucky. Some Florida water supplies are plagued with blue-green algae blooms that release irritating toxins. Adding insult to injury, the algaecides and extra disinfectants used to control these naturally occurring microorganisms make water taste like chemicals.

Beneath Florida is an 80,000-mile, multi-state aquifer holding billions of gallons of water. Replenished by rain, restoring the aquifer was rarely an issue in the nation’s fifth-wettest state as long as the weather and demographics remained stable.

But population growth of 300,000-plus annually is taking its toll on the water supply — new wells are being drilled at unprecedented rates. Drought has had an impact, but over-extraction is to blame for draining the aquifer and the natural springs that feed many public water supplies. Combined with the destruction of wetlands to make room for housing, Florida is facing a water crisis.

As water levels in the aquifer drop, the percentage of contaminants rises. What was once clean drinking water now contains higher levels of dissolved substances, such as sulfur and minerals, that give water a rotten egg smell and a bitter, metallic taste.

Conservation efforts are ongoing, but is it too little too late? Only time will tell. 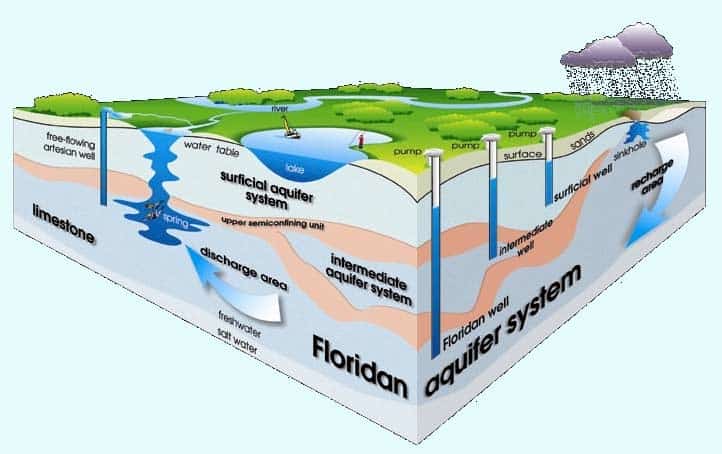 Florida’s geology is unique in many ways. A flat state, it has few of the peaks and valleys that serve as physical barriers against contaminants. Water sources are interconnected, so what impacts one affects them all.

Low in elevation, wells, and surface water sources are prone to seawater intrusions that give drinking water a salty taste. And tannins produced by decaying vegetation in swampy areas turns southern Florida tap water yellow. Safe to drink, high concentrations are nonetheless enough to cause a musty smell and off-flavor.

Florida also has a high water table and a thin soil layer — less than 13 inches in some places — making the state’s groundwater resource extremely vulnerable to contamination from runoff.

The Environmental Protection Agency (EPA) regulates the contaminants in public water supplies under the Safe Drinking Water Act. By their analysis, Florida’s tap water is perfectly safe to drink because it meets federal drinking water standards.

The EPA doesn’t completely disagree. For some substances, it’s created both enforceable limits and non-enforceable guidelines to give communities more time to address critical infrastructure issues. But lack of funding for clean water initiatives remains an ever-present barrier.

According to the EWG, Florida residents have been exposed to unhealthy concentrations of:

Trihalomethanes are chlorine byproducts formed during the water disinfection process. Known carcinogens, lifelong exposure is associated with skin and bladder cancer. Chloroform, among the most common, is linked to reproductive disorders.

The EPA acknowledged the toxicity of trihalomethanes in the 1970s. Yet, the Maximum Contaminant Level (MCL) was only recently reduced to 80 parts per billion (ppb) in 1998.

A 2021 study of nearly 1500 Florida water systems shows that at least 20 million residents were regularly exposed to levels higher than the 0.15 ppb health guideline.

Haloacetic acids are another group of disinfectant byproducts. Produced when chlorine reacts to naturally occurring organic materials, they’re as carcinogenic as trihalomethanes and can cause harm to a growing fetus.

The EPA’s legal limit for haloacetic acids is 60 ppb, a far cry from the 0.1 ppb recommended by the EWG. At least 1300 of Florida’s major drinking water supplies contain higher-than-healthy levels.

A household name thanks to the film Erin Brockovich, significant exposure to hexavalent chromium causes liver kidney damage, allergic dermatitis and some malignancies. The legal limit is 100 ppb, but at least 300 Florida water systems don’t make the grade.

Florida residents may be exposed to higher-than-healthy levels of radium. Both forms, radium-226 and radium-228, are common in the underground rocks within Florida’s aquifers. Associated with birth defects and organ damage, the EPA’s MCL for both forms combined is 5.0 pCi/L with a non-enforceable goal of zero.

Arsenic is a surprisingly common groundwater contaminant. Both naturally occurring and the result of human activity, it’s hard to avoid in some areas of the country, including Florida.

The EPA’s MCL for arsenic is 10 ppb, but the latest research shows that no level is safe to drink. California is leading the way with a public health goal of 0.004 ppb.

Chlorate is a disinfectant byproduct. A potential hormone disruptor, it’s not yet regulated by the EPA. Research into its health effects continues, but until the results are in, they’ve hedged their bets by adopting the EWG’s health guideline of 210 ppb.

Devastating to newborns, nitrate is one of the few contaminants for which the EPA recommends annual well testing. Common in groundwater near agricultural areas or green spaces where nitrate fertilizers are used, it enters the water supply through runoff.

Once common in non-stick cookware, flame-retardant fabrics and firefighting foam, the use of PFOS/PFOA has drastically declined. Still, its dangerous legacy remains. So-called forever chemicals, they take decades or longer to biodegrade.

According to the CDC, exposure to these chemicals in drinking water causes adverse health effects in humans, including:

A nationwide problem, the residents of Florida are not alone — at least 97% of Americans have been exposed. Cleanup is underway, but it’s slow going. Higher-than-average levels of PFOS/PFOA were found in more than 20 of Florida’s public water systems.

Florida drinking water is not immune to lead. Where construction is new, lead plumbing and service lines are rare. But older communities are at risk.

Between 2010 and 2015, nearly 50,000 Florida residents were exposed to unsafe lead levels from aging underground pipes and indoor plumbing. More than 10% of samples from 64 water systems exceeded the maximum contaminant limit.

Florida’s water is managed by the state government through five regional authorities, but the drinking water quality in these four areas reflects what you can expect as a long-term resident or guest. See EWG database.

From north to south:

Samples tested in 2021 were in federal compliance, but levels of five contaminants were above the EWG’s health guidelines:

Arsenic concentrations were well below the national average but above the 0.004 ppb standard adopted by California.

The Tampa Water Department serves three-quarters of a million customers. Testing identified 18 contaminants, but only six in concentrations above EWG recommendations:

By EPA standards, Tampa’s tap water is safe to drink. But arsenic levels are significantly higher than in the Jacksonville area and warrant filtration if you have kids in the house.

The Palm Beach area also has hard water — among the worst in the state at 19 grains per gallon. It’s not toxic, but water with high mineral content often tastes metallic or bitter. And it can cause limescale buildup in your plumbing system that damages pipes and reduces appliance efficiency.

The Miami Dade Water Authority is among the largest in the country, providing water for more than 2.3 million people. Eight of the 24 contaminants identified in its water supply, however, are above healthy limits:

Well water in this area comes from porous limestone, so it contains a large amount of sulfur and tannins. It’s considered safe to drink, but it may have a yellow tinge and a rotten egg odor.

What Can I Do About Unsafe Drinking Water in Florida? 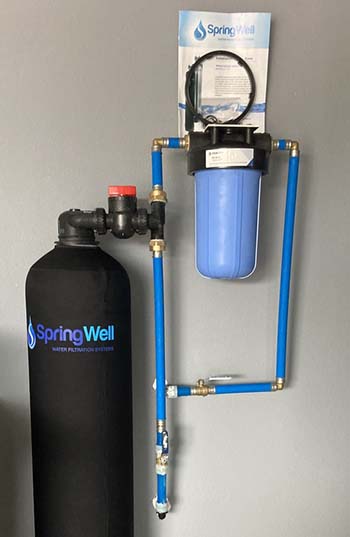 The good news for Florida residents is that the government takes water safety seriously. But until funding for infrastructure initiatives is secured, the best way to protect your family from chronic exposure to common contaminants is to filter your drinking water.

Buying bottled water is an option, but it’s expensive and hard on the environment. Filtration systems are a better value, and they don’t have to break the bank.

There are two types — whole-house filtration systems that purify water home-wide and point-of-use filters that treat smaller volumes of water for drinking and cooking. Which you should choose depends on the contaminants in your area.

In some cases, your choices are limited. Toxins from algae blooms, for example, cause asthma-like symptoms when they vaporize in the shower, making a whole-house filter ideal. But tor removing arsenic, an undersink reverse osmosis filter is a better choice.

Since most contaminants are only hazardous when ingested, point-of-use filters are an economical alternative to whole-home systems if you rent your home or are on a tight budget. A simple filtration pitcher can drastically improve your drinking water quality for as little as $35.

If you’re confused about water filtration technology, we recommend reaching out to SpringWell Water Filtration Systems. With 20 years of experience, they make some of the best water filters in the business. Based in Daytona Beach, they understand Florida drinking water.

Should I Test My Tap Water?

Testing well water is a homeowner’s responsibility — no government agency monitors water quality on private property. The Florida Department of Health recommends annual testing for nitrate and bacteria and offers test kits for just $20 — but the rest is up to you.

If you drink city water, you have an advantage. Suppliers test for dozens of contaminants daily — just ask for the results. Is it enough? Probably not.

Testing only measures contaminant levels before water leaves the treatment plant. If you live in a community built before 1986, your service lines or plumbing system may contain lead. Ultimately, the only way to know with certainty if your tap water is safe is to test it. The process is quick and easy.

We like SimpleLab’s Tap Score test kits because they’re budget-friendly, accurate and simple to use. Choose from single tests or panels curated for well or city water. You can also contact a local drinking water laboratory or let the pros at SpringWell help.

Tap water in Florida has its share of detractors, but the news isn’t all bad. Overall, it’s safe to drink and even safer and fresher-tasting if it’s filtered.